Day 20/30: Speed Read The Sorrows of Young Werther by Goethe 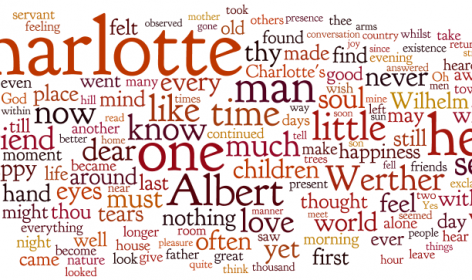 
This is day #20 of the One Book, One Day challenge. We’re going to speed read The Sorrows of Young Werther by Johann Wolfgang von Goethe at 500 words per minute (WPM) using AccelaReader.com.

About the Book:
The majority of The Sorrows of Young Werther is presented as a collection of letters written by Werther, a young artist of highly sensitive and passionate temperament, and sent to his friend Wilhelm. In these letters, Werther gives a very intimate account of his stay in the fictional village of Wahlheim (based on the town of Garbenheim, near Wetzlar). He is enchanted by the simple ways of the peasants there. He meets Charlotte, a beautiful young girl who is taking care of her siblings following the death of their mother. Despite knowing beforehand that Charlotte is already engaged to a man named Albert, who is in fact 11 years her senior, Werther falls in love with her. Although this causes Werther great pain, he spends the next few months cultivating a close friendship with both of them. His pain eventually becomes so great that he is forced to leave and go to Weimar. While he is away, he makes the acquaintance of Fräulein von B. He suffers a great embarrassment when he forgetfully visits a friend on the day when the entire aristocratic set normally meets there. He returns to Wahlheim after this, where he suffers more than he did before, partially because Lotte and Albert are now married. Every day serves as a torturous reminder that Lotte will never be able to requite his love. Out of pity for her friend and respect for her husband, Lotte comes to the decision that Werther must not visit her so frequently. He visits her one final time, and they are both overcome with emotion after Werther’s recitation of a portion of “Ossian”. Werther had realized even before this incident that one of them — Lotte, Albert or Werther himself — had to die. Unable to hurt anyone else or seriously consider committing murder, Werther sees no other choice but to take his own life. After composing a farewell letter (to be found after he commits suicide), he writes to Albert asking for his two pistols, under a pretence that he is going “on a journey”. Lotte receives the request with great emotion and sends the pistols. Werther then shoots himself in the head, but does not expire until 12 hours after he has shot himself. He is buried under a linden tree, a tree he talks about frequently in his letters, and the funeral is not attended by clergymen, Albert or his beloved Lotte.